skip to main | skip to sidebar

I drove over too the U of A this afternoon to attend the first day of the Pop Print conference and to see Trina Robbins speak about The Great Women Cartoonists. She was great, and said much about the women cartoonists of the early 20th Century that I didn't know, or had forgotten. I was lucky enough to have attended the show that she put together of women cartoonists at MoCCA in NYC, which was really wonderful. I also remember going to see her give a talk about Wonder Woman at The Museum of Sex in NY, which I really enjoyed. There is a great history that is highly unacknowledged by the mass audience pertaining to women and their success in the comics medium. Trina is bringing a lot of that to light. I'm looking forward to seeing her book on The Brinkley Girls this winter.
I got a chance to see the Pop Cult Comics anthology and meet Orion Ussner Kidder, who edited the book and put the project together. I'm pleased with how it turned out. Thanks Orion.
Here is my 2 page contribution to the book. 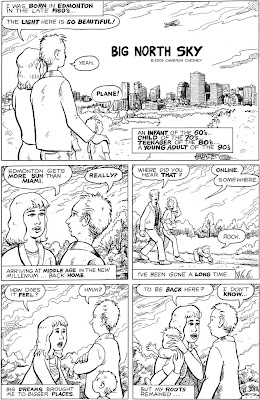 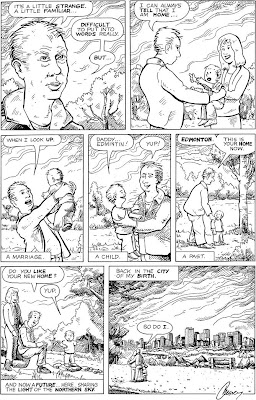 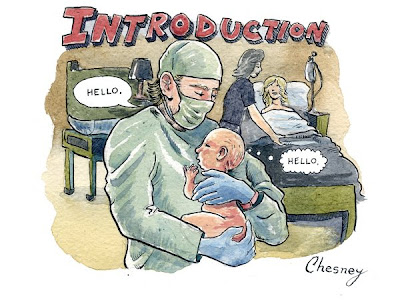 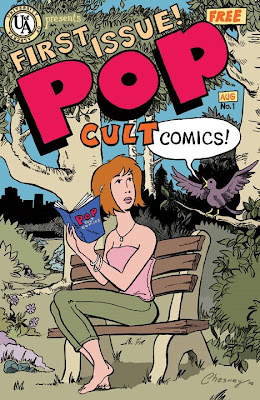 The University of Alberta is holding a conference next weekend, celebrating Popular Print Cultures - Past and Present, Local and Global. Part of this conference is devoted to comics, and will feature guests such as Trina Robbins, who will speak about the Great Women Cartoonists. I'm really looking forward to attending a cool local event that draws focus to the comics medium. I contributed a two-page story that will be part of a comic book that will be distributed as a freebie at the conference. The stories included in the book are by various local artists, and are based on the theme of local culture around the city. I'm looking forward to reading some of the other artists work, and meeting some of the other creators in the area too. Here is the front cover, which I completed last week. If you are in the Edmonton area come and check it out.
Posted by CamChes at 10:10 a.m. 4 comments:

The Dream - A Real Studio Part 2

When I was 13 I was given, as a gift, a book called "The Secrets of Professional Cartooning" by Ken Muse. It was the first book to give me a really thorough understanding as to the specific process a syndicated cartoonist undertakes to create his or her own work. It was a really great book for a young person with cartooning ambitions. I learned about the certain properties of various tools, such as the pen nib, and zip-a-tone (remember that stuff?). Methods such as, how to use a lightbox to transfer a sketch to bristol board (bristol board -- who knew?). It contained a great section that interviewed various professional cartoonists like Charles Schulz and Milton Caniff as to the specific tools that they preferred to use. For example, Schulz used a C-5 pen nib, and Caniff drew with a Gillott's #659 pen nib but also drew with a Winsor Newton Series 7 #3 brush (a brush? Are you kidding me? How do you draw like that with a brush? My shock would be doubled when I eventually went to price one out -- many weeks worth of allowance for a few strands of hair?!) This was all really great stuff to learn. I poured through that book for years, and I still have it today, 27 years later. Its dated now, but there is much in there that can still be applied.
The one page of the book that really captured my imagination was a reproduction of a plate from Leo Stoutsenberger's "Cartoonerama" correspondence course. It was called "Setting Up Your Studio", and basically it illustrated the working environment of a professional cartoonist. This to me was completely fascinating. I could only imagine how pleasurable it would be to be able to work in such a "tricked out" space. Really when you examine the image, its nothing much more than an office space, but it was all of the individual regular items added together that made it so hugely appealing to me. I mean really. What's so exciting about masking tape and filing cabinets? No to me, this was it. This was the mark of authenticity. I hadn't looked at this image in many years, but I unearthed it recently in a move to our new home. There's a certain satisfaction in looking at this illustration and then looking at my new studio. Its a satisfying thing to see this and know that I like my new studio ... much better.
Now its been 27 years and I still can't find the stupid "tabouret". Where is it? Where?!

The above image is reproduced from The Secrets of Professional Cartooning by Ken Muse-Prentice Hall-1981
Posted by CamChes at 12:52 p.m. No comments:

The Dream - A Real Studio 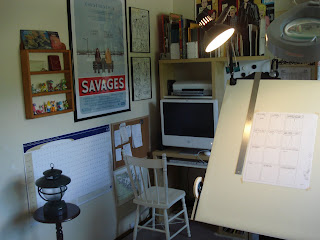 I thought it would be best to dedicate my first post to my new studio space. After years of sub-par work environments, stashed into a corner of shared living spaces I'm actually working in a significant work space that I can call my own. It's a pretty cool thing. I love having a space to go where all my "stuff" is, a space where I can move around... and take a few steps back even. A window that doesn't look out onto a brick wall.
After a significant break from working on Daphne, I'm finally back at it again (That's a page on my table right there). Drawing a full length graphic novel takes a LONG time, and can be a fairly isolating experience. I might reconsider my stance on serializing Daphne. At first I was determined to finish the whole thing before publication, but now I'm not so sure. Maybe a webcomic, maybe a self-published mini. I have a few plans floating around. Perhaps something new will come about. 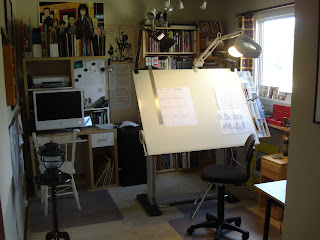 CamChes
I am a writer/actor/illustrator and cartoonist recently returned to Alberta, Canada (after 16 years of living in NYC, plus two in Vancouver) with my lovely wife, and our young son.